Rambusch was honored by the National Shrine’s commission to commemorate this historic event with a canonization banner. 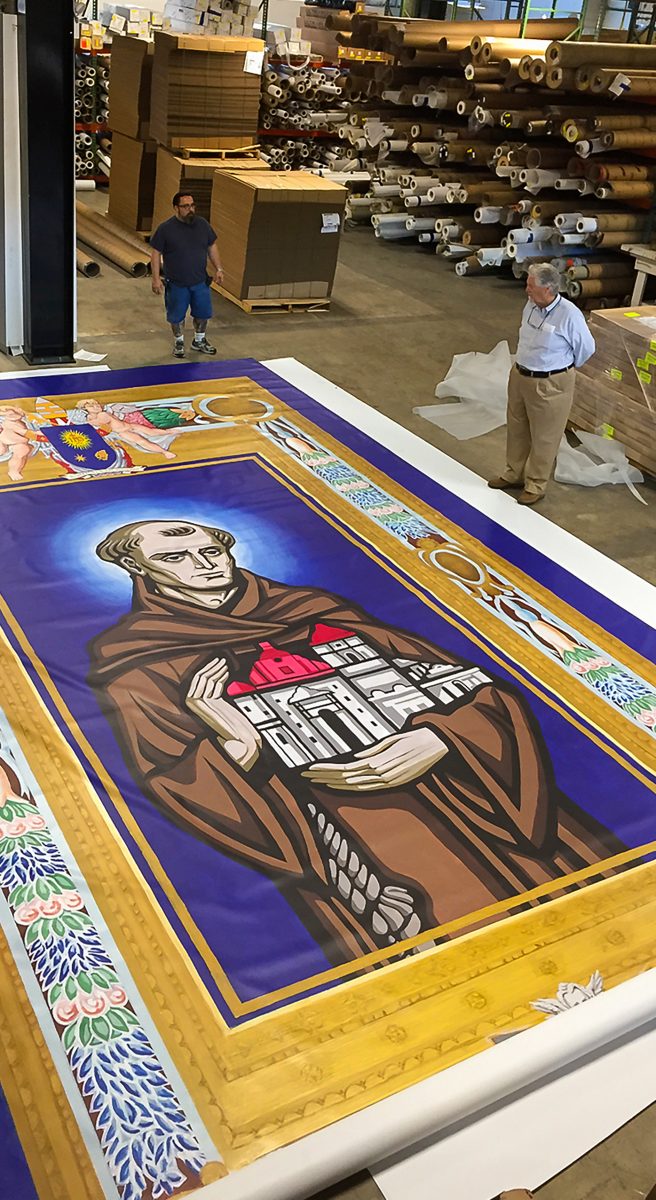 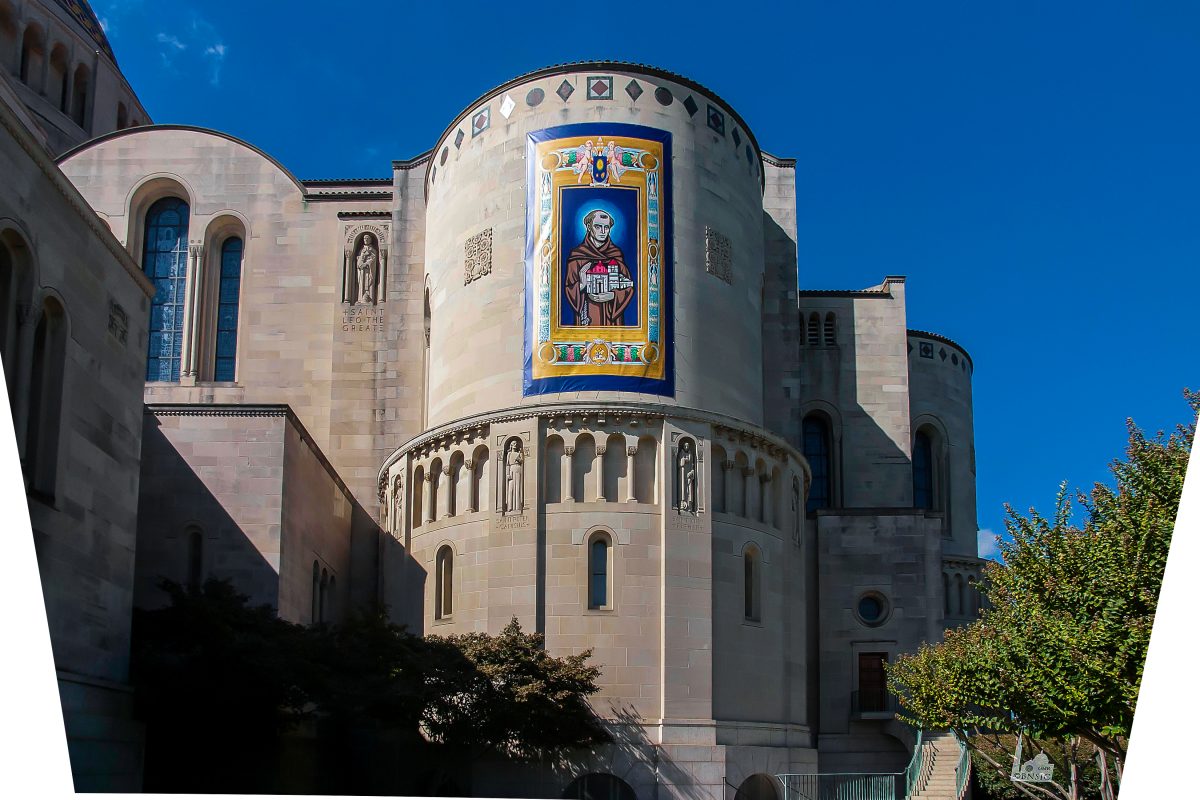 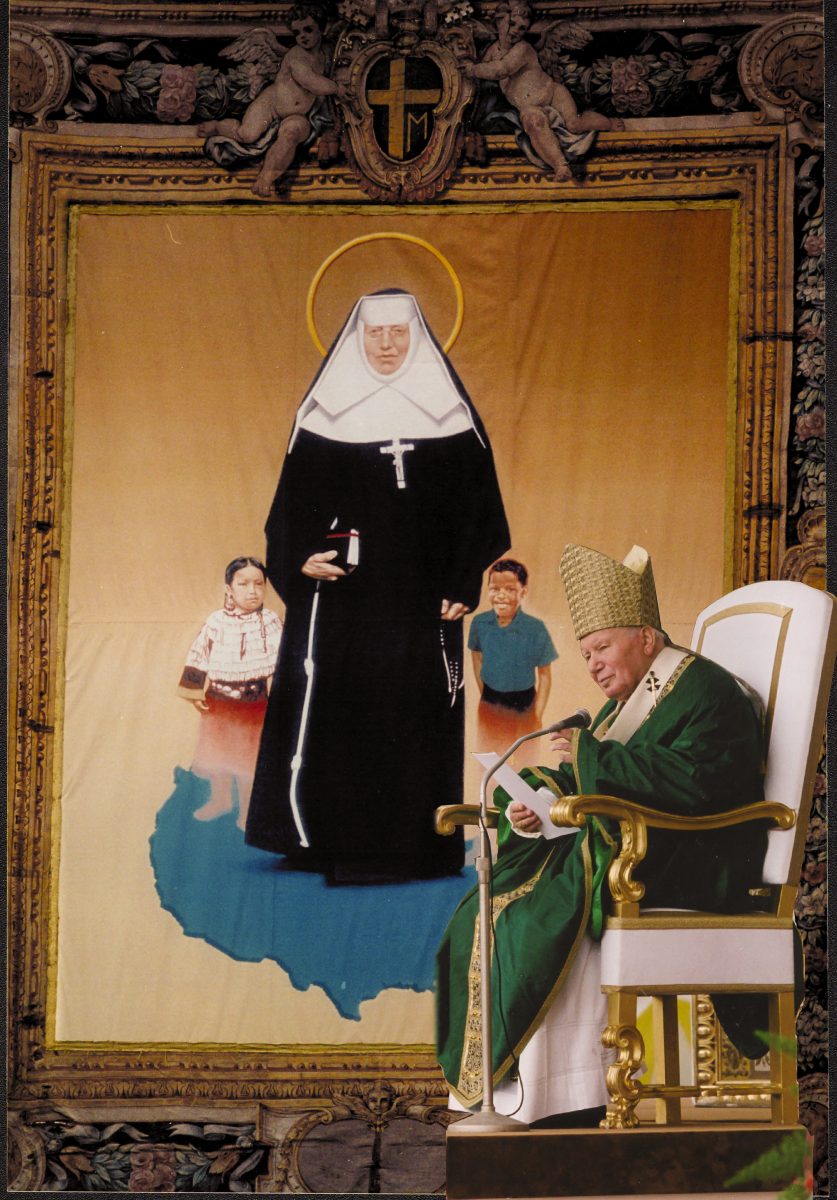 The St. Junípero Serra Canonization Mass at the Basilica of the National Shrine of the Immaculate Conception made history by being the first to take place in the United States. Rambusch was honored by the National Shrine’s commission to commemorate this historic event with a canonization banner.

The practice of displaying a banner depicting the saint being canonized is a tradition in the Catholic Church that dates back to the 13th Century. The figure of the saint is always full-size and standing. The iconography of the border contains symbols and images that point to the culture and events of significance in the life of the saint and the times in which he/she lived. Previously, the Company had designed and produced the banners depicting John Neumann and Katharine Drexel, which hung in St. Peter’s, Rome for their canonizations.

The borders of Saint Junípero Serra’s banner reference those traditionally used in Rome, yet there was an important design change in their application. As is typical, the Papal Coat of Arms is placed at the top but for this banner, the Coat of Arms of the Basilica of the National Shrine of the Immaculate Conception was placed at the bottom. The Basilica’s Coat of Arms, which was created by Dr. Geraldine Rohling, the Shrine’s Archivist, visually tells the story of Pope Francis visiting the Basilica to celebrate the Canonization of Father Serra.

The original oil painting by a Rambusch artisan began one quarter full-size, and was enlarged to 16-ft wide by 30-ft tall using dye-sublimation printing on UV-resistant vinyl.

Rambusch has designed and made objects, lighting fixtures, stained glass and sculpture for the National Shrine since its beginnings in the 1920s.

“The banner of Saint Junípero Serra, which was fabricated by the Rambusch Family for the Canonization Mass on September 23, 2015, was a beautiful replication of the stained glass window in the Shrine’s Upper Sacristy. It hung majestically from the Shrine as Pope Francis declared Junípero Serra the 13th Saint of the United States.”